An Epic Week with Amorim and Two Tough Winemakers

19 Mar An Epic Week with Amorim and Two Tough Winemakers

Posted at 14:54h in Uncategorized by Amorim Cork South Africa

And they’re off. Winemakers Jacques Wentzel from Black Elephant Vintners and Braam Gericke from Wildekrans Wine Estate began their second Absa Cape Epic, known as the Tour de France of mountain-biking, with Sunday’s 27km Prologue at Meerendal Wine Estate in Durbanville. Team Jacques and Braam are this year supported by, among others, Amorim Cork and after completing this epic endurance event in 2016 they are hoping to put in another good performance his year.

Although just finishing the event is an astonishing achievement: The 2017 route will take riders through 691 km of Western Cape countryside and up plenty of leg-breaking hills: the accumulated vertical gain over the eight days will be 15 400m.

What gives competing in the Epic an extra needle for winemakers like Jacques and Braam, is that the bulk of the training has to be done during the Cape wine grape harvest.

“It takes two lines of focusing,” says Jacques. “For the Epic I have to put in between 15 and 20 hours a week of training, which can be a bit of challenge as this is during a winemaker’s most important time of the year. But where there is a will, there must be a way. The training has been done, and the young Black Elephant Vintner wines are looking great!” 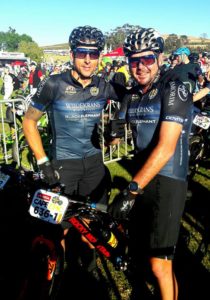 Jacques Wentzel, left, and Braam Gericke before the Prologue.

Braam admits he could not do the desired amount of training during harvest time, as he is responsible for vineyards and a lot of logistics at Wildekrans in Botrivier. “I put in around seven hard hours of biking a week – but I did my long hours of training in spring,” he says. “Fortunately I felt strong during the Prologue. This is my third Epic, so I know what to expect.”

On Monday the race begins in earnest with a brutal 101km stage beginning and ending in the seaside town of Hermanus.

“It is going to be a difficult day in the saddle,” says Braam, “very technical as well as energy-sapping.”

Jacques and Braam bringing it home at the end of the Prologue.

Jacques says the riders, who have known each other since schooldays, work well as a team. “Braam leads the way on the tricky descents and technical parts, while I tend to be a strong climber,” he says. “We depend on each other for every turn of the pedal, and your understanding of your cycling buddy is as important as the training and nutrition.”

Braam says that they like to eat “real food” during the entirety of the race. “Jacques tends to start the day with shakes and oats and stuff, while I tear into the previous night’s left-overs.”

At the end of each stage, nothing is better than a braai and a cold beer – although Amorim Cork SA MD Joaquim Sá reckons that a bit of Portuguese culinary sustenance will be needed by the team. “We are joining the boys later in the week and will be taking along a local dish from northern Portugal,” says Joaquim. “It just might be the secret every participant in the Epic is hoping for.”f