150 Years: A Milestone for Amorim

Posted at 07:18h in Uncategorized by Amorim Cork South Africa

This is one of the proudest years in the history of Amorim Cork, as here in 2020 the company reaches an exceptional milestone of becoming one of the very few wine industry suppliers in the world to celebrate its 150th anniversary.

The story begins in Portugal at Rua dos Marinheiros, in Vila Nova de Gaia, in 1870. On this street – inspired by the wine cellars that lined it – António Alves de Amorim founded the rudimentary business for the manual production of cork stoppers. His vision was to supply his top-quality cork stoppers to close and protect the sought-after bottles of port which the great cellars were producing for international markets, wines that were recognised as the pride of Portugal.

Before the corks could be made, the raw material had to travel more than 350km from the cork forests in the south to Gaia in the north by rail and oxen-drawn carts.

But it was in a haystack in Santa Maria de Lamas – nowadays the Amorim museum – that Amorim’s first industrial unit was born and the beginning of generations at the helm of a cork empire.

From this humble family business, built with the exceptionally characteristic effort of those who believe in their ideals, a distinctive company flourished. One which the following generations were able to lead, taking care of the family’s work heritage and legacy in an exemplary way.

Taking on the role of stewards and responding with resilience, they moved the cork legacy forward by innovating, reinventing, seeking new opportunities and learning from challenges that emerged by making the world realise that the limit of cork is still a long way from being reached. The potential for applications where cork can be used as a material, thanks to its technical characteristics and sustainable nature, is far from being achieved. 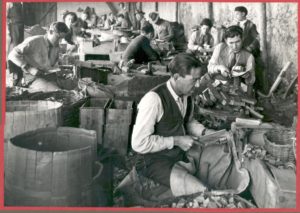 Applications already include construction, floors, aeronautics, automobiles, footwear, among others, the result of a process of integrated production ensuring no cork is wasted. While, at the same time, also supporting several initiatives for the collection and recycling of cork stoppers on the five continents.

But despite the family’s DNA and business evolution, there are certain aspects of Amorim that remain the same since the days of the founding fathers. Amorim continues favouring the value of good relationships and proactively taking and holding the interests of our customers to our hearts. Just as a cork stopper has for centuries been the true partner to a bottle of wine, so Amorim sees its customers as partners, knowing that the fortunes of one are inextricably linked to that of the other. 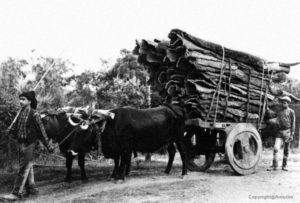 Transporting cork bark from the south of Portugal to Gaia in the north.

And of course, our product: cork. This gift from nature has become a part of the soul of Amorim, and everything we do gravitates around ensuring the customer to whom we pass on this practical, natural and magical product receives the best quality cork through the best customer service.

This has been the case for 150 years, and will be for the years to come.

It runs in the family. And it makes us all very proud.