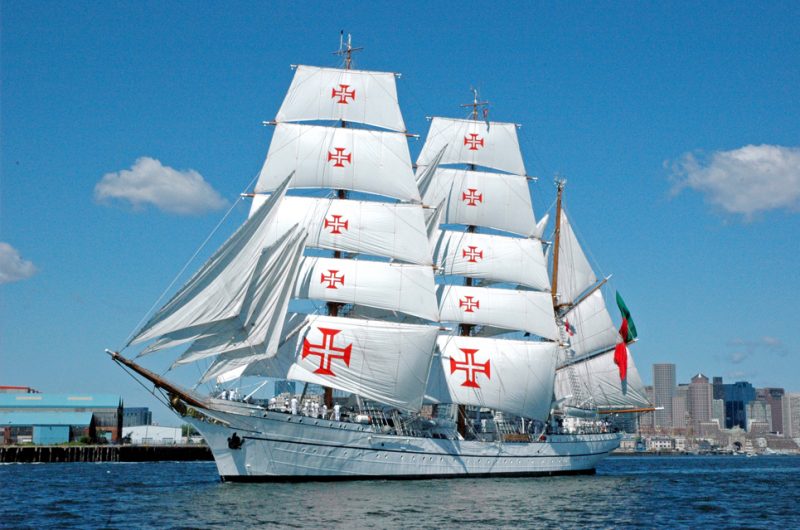 Posted at 17:07h in Uncategorized by Amorim Cork South Africa

Cape Town turned out to be the unscheduled last stop for the NRP Sagres, which was undergoing a 371-day voyage of 75 000km, to commemorate the 5th centenary of the ‘round-the-world’ voyage of legendary Portuguese discoverer Fernão de Magalhães. It was this pioneering sea-journey that opened much of the world to European exploration and discoveries.

However, the NRP Sagres’s historical voyage, which had been planned for 18 months, was called off after the fifth leg as the global crisis caused by the Coronavirus deepened. This caused the Sagres to leave Cape Town for its return voyage to Lisbon, with no visits allowed, after having reached the Mother City from Buenos Aires earlier in the same week.

NRP Sagres set off from Lisbon’s Santa Apolónia cruise terminal on 5 January earlier this year with a crew of 142, with stopovers planned in over 20 countries. Not only was the aim to commemorate the 5th centenary of Portuguese naval exploration, but also to promote the establishing of Portuguese culture in different corners of the globe.

President of Portugal, Marcelo Rebelo de Sousa, was among the many dignitaries at the official Lisbon send-off. The trip, he stressed, is all about “constructing the future in the affirmation of our Navy, our science, our technology, our sport, and our youth”.

The compass made with Amorim Cork.

Keeping in-tune with the world’s tackling of environmental issues, the NRP Sagres was also acting as a base for important scientific experiments and conferences around the world aimed at discussing issues like tackling the threat to the global environment. The various scientists on board were to meet with their counterparts in the stopover countries along the way to conduct experiments and to discuss possible solutions to threats facing the natural environment. A global problem, faced by all.

In a year that Amorim Cork is celebrating 150 years, Amorim South Africa would have been honoured to be part of a tribute in Cape Town to this amazing mission.

Not only did the Portuguese navy, famous for its maritime explorers, pave the way for their country’s rich historical and cultural legacy throughout the world. These voyages also played an inspirational role in furthering the Portuguese entrepreneurial spirit, including in South Africa where Amorim stands proud as a leading company representing Portugal.

Also, the mission is aligned with Amorim’s commitment to addressing climate change and espousing the fundamental values of promoting sustainable development.

To honour the voyage of the NRP Sagres, Amorim was planning to hand-over a magnificent compass on a unique cork mounting, especially made by Cape Town designer Laurie Wiid, to the captain of the ship. The compass symbolises the naming of Cabo das Agulhas (Cape of Needles) by the Portuguese seafarers who, as they approached the most southernmost tip of Africa, saw the needles of their compasses not able to vary between true north and magnetic north.

The compass will travel to Portugal in due time to be handed to NRP Sagres. In the meantime, we wish them a safe trip back to Portugal.