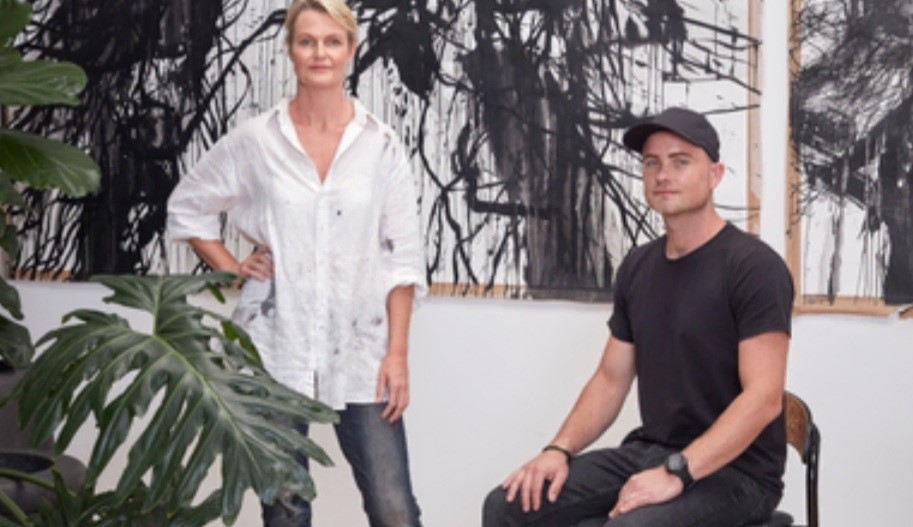 Posted at 10:48h in Uncategorized by Amorim Cork South Africa

The historical relationship between Portugal and South Africa started in the late 15th century with the “Portuguese Age of Discovery”. Then, the Portuguese explored Southern African coasts, nominally claiming them as their own. Here in Cape Town, some centuries later, we had a contemporary collaboration between a fine artist and a high-end designer. But what’s the connection with Portugal? For artist Robyn Denny of Berman Contemporary, and designer Laurie Wiid van Heerden of Wiid Design, Portugal has figured centrally in their recent work, and its shared core principle of sustainable practice.

In Robyn Denny’s case, her series of paintings and video stills were inspired by her visits to the so-called “Chocolate Islands” of Sao Tomé and Príncipe. These islands were Portuguese colonies producing much of the world’s cacao until the early 1900s. Nowadays, thanks to a partnership between local government; UNESCO; the NGO ‘Fundação Príncipe’, and the driving force of another South African, Mark Shuttleworth – whose HBD holds the tourism concession – Príncipe functions as a protected biosphere reserve. In this spirit, Robyn Denny has dedicated proceeds from sales of her limited-edition prints to supporting the valuable work done by ‘Fundação Príncipe’ on the economic and social development within the community.

As for Laurie Wiid, it was his educational sojourns to Portugal which initially inspired him. Visiting Amorim, the world’s largest natural cork producer and distributor, and the nearby cork forests, this local designer’s vision, with respect to the largely untapped design potential of cork, was formed. Laurie played a fundamental role in the cork design revolution, pushing the limits of this material on high-end collectible, and functional, design applications.

Opening the exhibition, Joaquim Sá, MD of Amorim Cork in South Africa, said the show represents the spirit of creativity, that essential expression of art from the heart, out of Africa but with a tangible influence from the proud nation that is Portugal.

Sá added that the exhibition honours the creativity of South Africans who are inspired by Africa and the world beyond. “Here Cape Town is at the heart-beat of the continent’s creativity and is becoming renowned throughout the world as an artist and design capital,” he said. “This is set to continue as this spirit of innovation and artistic endeavour never ceases. The Roman adage ‘always something new from Africa’ remains more relevant today than ever.”