Posted at 11:00h in Uncategorized by Amorim Cork South Africa

Year 2021 is proving to be a major celebratory one for Cap Classique, the South African sector of bottle-fermented sparkling wines. Not only does this year see the 50th anniversary of the birth of Cap Classique being celebrated, but the category’s leading competition, the Amorim Cap Classique Challenge, marks 20 years of recognising the top wines in this premium segment.

Sá says that 2021 is a year in which the South African wine industry needs to be congratulated for the dynamic and superb category of Cap Classique sparkling wines that have captured the imagination of the wine world since 1971. 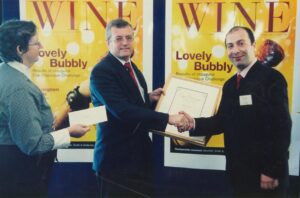 “While 50 years is deemed young in wine culture terms, the standard of Cap Classique today underscores the immense progress and impassioned innovation that has become a feature of South African wine in general,” he says. “Half a century back the first Cap Classique was made on Simonsig with Chenin Blanc grapes using rudimentary equipment on an experimental basis. Now, 50 years later, there are over 100 producers committed to Cap Classique. They are using the magnificent diverse terroir of the Cape to source a variety of cultivars from which to craft bottle-fermented sparkling wines whose excellence is recognised throughout the world.

“In the 20 years of the Amorim Cap Classique Challenge the judges, participants and wine-loving public have seen the terrific progress in Cap Classique quality and it has been an honour for Amorim Cork to be a part in this proud sector of South Africa’s wine offering.”

Pieter Ferreira, chairperson of the Cap Classique Producers Association, says the Amorim Cap Classique Challenge has over the past 20 years played an invaluable role in providing a focus on excellence for the category and raising quality standards.

“Committed to our Cap Classique category, the Amorim Challenge has provided an important platform for recognising and promoting the excellence of Cap Classique,” he says. “For the past two decades, each entrant of the Challenge has received an informative take-out pertaining to the standards and perceived quality of his or her wines, providing invaluable insights with which to pursue the goal of making the best Cap Classiques possible. The annual Amorim Cap Classique Challenge has thus been a major part of the development of the category, a partnership for which the Cap Classique Producers Association is extremely grateful. And we look forward to the next two decades of working together with Amorim to strengthen this dynamic category of South African wine.”

Producers have until 14 July to enter their wines, with late entries being accepted until 23 July. Judging takes place from 11 to 13 August, with the awards function held on 16 September at Tintswalo. For further information see www.capclassique.co.za.